Let me start by saying that I enjoy many aspects of Peter Jackson’s Hobbit trilogy. Overall, however, I felt that the story was spoiled by an interminable running time, unengaging plot tangents and constant narrative filibustering. What especially saddened me was how Bilbo (the supposed protagonist of the story) was rendered absent for large portions of the final two films. Back in 2012, I had high hopes of adding The Hobbit to my annual Lord of the Rings marathon, but in its current bloated format, I simply cannot see that happening.

So, over the weekend, I decided to condense all three installments (An Unexpected Journey, The Desolation of Smaug and The Battle of the Five Armies) into a single 4-hour feature that more closely resembled Tolkien’s original novel. Well, okay, it’s closer to 4.5 hours, but those are some long-ass credits! This new version was achieved through a series of major and minor cuts, detailed below:

I used 720×576 MP4s for the recut. The resolution is slightly reduced after a few exports, but it’s still comparable to DVD quality. Here are some time-stamped screenshots, if anyone wants a better impression:

My main goals in undertaking this edit were to re-centre the story on Bilbo, and to have the narrative move at a much brisker pace (though not so fast that the audience lost grasp of what was going on). Creating smooth transitions between scenes was of particular importance in this regard. I even reordered a few moments in the film to make it flow better. The toughest parts to edit were the barrel-ride and the fight on Ravenhill (since Legolas and Tauriel kept bursting in with their gymnastics routine). If you have any further questions over what was taken out and what was left in, please post them in the comment’s section.

If you would like to download the movie, then simply add this torrent to your BitTorrent client. This is the final version of the fanedit, and is 6GB. However, if you would prefer a smaller file-size, you can also download the lower-resolution 2GB version, by using this torrent. If you do not have a BitTorent client, I would recommend installing μTorrent.

This was a labour of love, so please share and seed. And feel free to reupload the video and post your own links wherever you want (including the comments section).

“May the hair on your toes never fall out.”

Update (22 Jan): Apologies for the delay, but I have uploaded the 6GB version of the fanedit. This version also has a few alterations, based on people’s requests, including trimming down the chase sequence through the goblin tunnels; colour correcting the transition from the Misty Mountains to Beorn’s house; taking out the Bombur “barrel bounce” (which is apparently the bane of some people’s existence); and tidying up the final fight on Ravenhill. I have no idea how to remove the gold-coating from Smaug, though. I tried a few variations, but none of them work very well. So, this is the final version, for good or ill. 😛

Now, I do want to temper people’s expectations for the 6GB version. Considering the difference in size, the quality isn’t dramatically better. Rather, it is somewhere between a DVD and Blu-ray. The screenshots above are a good indication. That said, the image is sharper, and the colours are a little more vibrant, so it’s probably preferable for people who would like to watch the fanedit on a big-screen TV. Either way, you can click the links above to access it. Thanks!!

Update (23 Jan): Check out this DVD cover that was created by George from the comments section. I am equal parts delighted and amazed. Thanks George! 😀 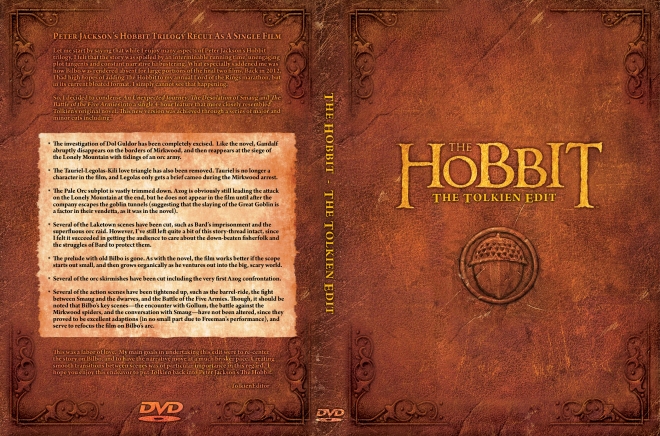 Update (25 Jan): A big thanks to Vedder for putting together the first set of subtitles for The Tolkien Edit. If anyone else is gracious enough to create subtitles in their native language, please post them to the comments section, and I will add them to the site. Here is the list so far, along with the usernames of those responsible: